Last week the final group from Crossroads Community Church “invaded” Nicaragua.  While the other groups were primarily focused on addressing specific tangible issues, the family team was focused on building into the young people of El Canyon from a relational standpoint and on being a picture of Christ’s love.  They started out the week by partnering with Dulles Community Church, a team in town with ORPHANetwork, to take fifty-five of the kids to Ruby Ranch, a camp being developed by Open Hearts Ministry.  Between the bikes, the horses, the beautiful views and, of course, the giant slip’n slide/water slide the kids had an incredible time.

On Tuesday, the team had the opportunity to do crafts with the Martin Luther King School, the primary school in El Canyon.  This was a neat chance to continue to solidify our relationship with the school and support the teachers.  It also gave the young people on the team a picture of what school looks like in Nicaragua on a daily basis.  In the afternoon, the team went to the Huembes Market to learn what it would be like to provide for their needs on the typical income of a family in El Canyon.  Splitting up into three teams, the team took the funds they were given, approximately $16 per team, and attempted to purchase what a typical family of four would need on a weekly basis.  This was certainly an eye-opener for many of the team members.

The following day, the team traveled to Nueva Vida to serve at one of the many feeding centers.  A refugee camp for families displaced by hurricane Mitch in 1998, Nueva Vida is extremely poor.  After touring part of the community and three of the feeding centers, the team assisted one of the feeding centers with their daily serving of lunch to approximately 160 children.  The team was struck by the dichotomy between the conditions of the community and the joy of the kids.  It was certainly a great lesson for everyone involved.  Later in the evening, the team picked up some of the young people from El Canyon and went to the national soccer stadium to see a professional game.

Thursday was another day full of fun and adventure as the team traveled with some of the teenagers from Puente de Amistad to see and participate in a pottery demonstration.  In addition to explaining home to make pottery, the potter, Marciel, told us how the process is similar to what God does in our lives.  It was a powerful demonstration and a neat chance for the kids and the team to learn.  In fact, the team and the teenagers even tried their hands at the foot-powered pottery wheel.  Needless to say, they still have a lot to learn.

Friday the team took a day off at the volcano lake, Laguna de Apoyo, and returned in the evening to participate in a movie night at El Canyon.  Saturday brought more fun as team and some of the young people from El Canyon piled on a bus to head to the beach.  A great time was had by all, including the caretakers from El Canyon that accompanied the team and youth.

Sunday morning the team arrived at church to say their final goodbyes before boarding a plane for the United States later that day.  After a blessing from Pastor Josue, the team boarded the bus to head to the airport.  Although the “Crossroads Invasion” has ended, the hope they were a part of bringing lives on.  In partnering with the church and the orphanage, the teams were able give a boost to the ongoing ministry that is happening in El Canyon.  This hope that lives on is the hope of Christ that has changed my life and just might change an entire community. 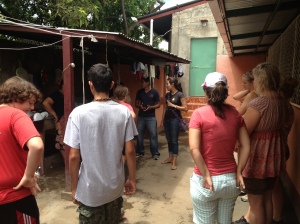 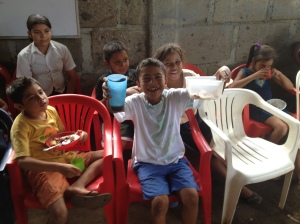 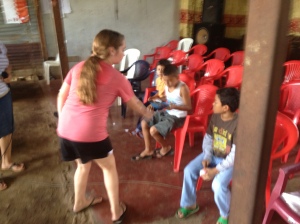