Happy Wednesday from Nicaragua! Sometimes I think I know what I am going to write about and then something happens and, in an instant, the topic suddenly changes. Yesterday I had one of those experiences and, as eluded to in the previous sentence, today you get to read about it.

If you have never had the opportunity to come to Nicaragua, my words will not do justice to the interesting experience driving in Nicaragua can be. As you might expect, the roads tend to be a little rougher than in the United States and vary a lot from place to place. You can easily go from a nice paved road, to a dirt road in a matter of moments. There also tends to be a lot of potholes and obstacles in the road, especially during rainy season. Another interesting aspect of driving in Nicaragua is the variety of “vehicles” with which one shares the road. It is not unusual to pass a late model truck, a tractor trailer, a 1970’s model station wagon, a horse cart and a man on a horse all within one kilometer. It certainly keeps life interesting and requires quite a bit more attention than driving on tradition highways in the United States. With that in mind, it is not unusual to run over palm branches, rocks and various other small obstacles while driving. Because I drive an “almost indestructible”, jeep style Toyota Land Cruiser, this typically isn’t an issue. I thought this was the case yesterday, but I was unfortunately incorrect.

Travelling on the Suburban Highway (name has been translated to English) yesterday afternoon, I heard what sounded like a typical small rock or object come in contact with my tire. This is a daily occurrence and, even when the stone become wedged between the rather large tread of my tires, not a reason to be alarmed. The extent of the “damage” is normally a small scraping sound each time the stone touches the pavement until it finally dislodges its way to freedom. Thinking this was what occurred yesterday, I continued driving without giving a second thought to what was in my tire. Approximately, two kilometers later, I stopped at the traffic light and waited for the light to turn green so that I could make a left turn onto the South Highway. As the light became green and I began to accelerate, I noticed that the truck was suddenly running considerably rougher than usual. My intrigue became concern when I proceeded to make the left turn and I heard a loud thumping noise coming from the rear, passenger side of the truck accompanied by a considerable deterioration of the handling of my zebra-striped Land Cruiser. Realizing something was terribly wrong, I quickly pulled over to the right-hand “shoulder” so that I could determine the issue. Upon jumping out of truck, my suspicions were confirmed, I had a flat tire.

An important note about the stretch of the South Highway on which my truck was now sitting is the large incline and the lack of actual shoulders. While I had all of the necessary tools and a spare tire, both of these facts could potentially make changing the tire more interesting. Thankfully, instead of being in the middle of the road, I was able to pull half of the truck into the driveway of a small business. Realizing that it might be a good idea to pull the truck all the way into the driveway, I walked up to the entrance of the business, which was a small restaurant, to ask if they would allow me to use their driveway or parking lot to change my tire. It was at the moment, what seemed to be a misfortune became one of the highlights of my time in Nicaragua.

As I approached the entrance to the restaurant, one of the people who worked their noticed the state of my vehicle and came out to investigate. As he came near to me, he said hello in English so I asked him, in English, if he would mind if I pulled the truck into the driveway. He said that would not be a problem, but that his driveway was down the road approximately ten yards to the opposite direction my vehicle was facing. I think we both quickly determined this wasn’t a great option because, in somewhat broken English, he said he could help me change the tire. Living in a country as poor as Nicaragua and being constantly approached in the street by someone selling something or begging for money, my immediate thought was, “how much is this going to cost me”. Since I thought it was important that we were on the same page, I proceeded to ask him how much I would need to pay him to help me change the tire. With a somewhat puzzled look on his face, he said, “I know David from the Christian school and I will help you change the tire”. It was at that moment that I realized he meant that he just wanted to help me change the tire out of the goodness of his heart and not as a way to make a few bucks. I said thank you and tried to ask him which Christian school he was referring to as I, in fact, did not know who David was. He told me again that he knew David from the Christian school and began to change my tire. He also enlisted a few of his friends who were in the close vicinity to help us. Additionally, because of the slant of the road and the tightness of the lug nuts, he brought out his heavy duty jack and four prong lug wrench to get the job done. Between him and his friends, and a little help from me, we quickly changed the tire. Before I drove away, he asked me to say hi to David (I was never quite able to explain that I didn’t know David) the next time I saw him.

As I drove away, I thought about how incredible what had just happened truly was. The item I had run over was a large nail of some kind and, because I have tires that require a tube, I easily could have lost tire pressure over the two kilometers prior to the place at which I ended up stopping. Because that didn’t happen, I stopped in front of a restaurant of a kind stranger who knew a person from the States named David that had apparently left a positive impression on him. For whatever reason, possibly the fact that I look much like many of the teachers at the Nicaraguan Christian Academy, this stranger assumed I must have been a friend or co-worker of David’s and took it upon himself to change my tire for nothing other than a handshake and the possibility that I might say hi to David for him. I don’t know this David, but I am certainly thankful that he treated this Nicaraguan man well enough to compel him to change a stranger’s tire, and no less someone who looks much different from himself. Certainly this could all be coincidence, but it doesn’t appear that way to me. I can only assume that God orchestrated these events and perfectly timed them so that what could have been demoralizing was instead a huge blessing and brought Him glory.

Proverbs chapter 3 verses 5 and 6 say, “Trust in the Lord with all your heart and lean not in your own understanding; in all your ways submit to him, and he will direct your paths” (NIV). Yesterday’s event reminded me how perfect God’s timing is and how I need to follow and trust in Him in everything I do. In reality yesterday was a pretty minor inconvenience and, in the end, probably doesn’t matter in the grand scheme of life. At the same time, it was a great reminder of how God has worked in my life over the years, including directing my paths in such a way that I had the ability to move to Nicaragua. It is also a brings to mind how much everyone involved in the work here needs to trust in God’s timing and direction as we move forward. This week we have a meeting to begin the process of installing agricultural training and possibly other vocational and business training opportunities at El Canyon. We also hope this allows us to increase our spiritual training through deeper and more consistent discipleship. It has taken us about six months to get to this point in El Canyon, but it appears that God has perfectly put into place everything we will need. As usual, His timing is far better than ours. I am sure this will continue to be true in future opportunities as well if we continue to allow God to direct our paths.

God is a God of perfect timing. Let today be the day where you begin trusting that His clock is better than yours. 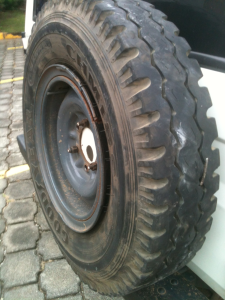